Ernest Albert Garlington was born at Newberry, South Carolina on February 20, 1853.  He received his education at the University of Georgia from 1869 through 1872 and then graduated from West Point in 1876.   He officially entered the service in Athens, Georgia.

He was commissioned a Second Lieutenant, 7th United States Cavalry, June 15, 1876 and was subsequently promoted through the grades to Brigadier General, Inspector General of the Army, October 1, 1906.

He commanded the Greely Relief Expedition in 1883; was severely wounded in battle with hostile Indians at Wounded Knee, South Dakota, December 29, 1890.  He was awarded the Medal of Honor for distinguished gallantry in that action.

He was a member of a board which established Cavalry drill instructions, 1894; Inspector General in Cuba during the Spanish-American War, 1898; was present at the battle and siege and then surrender of Santiago de Cuba in that war; was Inspector General of the Division of the Philippines during the Insurrection there, 1899-1901 and May 2, 1905-June 4, 1906; served on the General Staff of the Army from October 1, 1906. He was the author of "Historical Sketches of the Seventh Cavalry Regiment: A Catechism:" "Cavalry Outposts,"; "Advance and Rear Guards Reconnaissance."

He died on October 16, 1934 and was buried in Section 3 of Arlington National Cemetery. 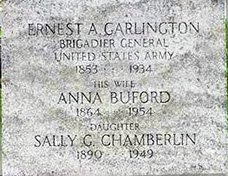