Pless was born Stephen Pollard on September 6, 1939, in Newnan, Georgia.  After his parents divorced, his mother Nancy Lassetter Pollard moved to Atlanta and remarried, to Berlin Pless. Stephen was adopted by his stepfather and took the Pless surname.  He attended Decatur High School in Decatur before transferring to Georgia Military Academy in College Park, graduating from that school in 1957.

He died in a motorcycle accident on July 20, 1969 just six months after receiving the Medal of Honor.

For conspicuous gallantry and intrepidity at the risk of his life above and beyond the call of duty while serving as a helicopter gunship pilot attached to Marine Observation Squadron 6 in action against enemy forces. During an escort mission Maj. Pless monitored an emergency call that 4 American soldiers stranded on a nearby beach were being overwhelmed by a large Viet Cong force. Maj. Pless flew to the scene and found 30 to 50 enemy soldiers in the open. Some of the enemy were bayoneting and beating the downed Americans. Maj. Pless displayed exceptional airmanship as he launched a devastating attack against the enemy force, killing or wounding many of the enemy and driving the remainder back into a treeline. His rocket and machinegun attacks were made at such low levels that the aircraft flew through debris created by explosions from its rockets. Seeing 1 of the wounded soldiers gesture for assistance, he maneuvered his helicopter into a position between the wounded men and the enemy, providing a shield which permitted his crew to retrieve the wounded. During the rescue the enemy directed intense fire at the helicopter and rushed the aircraft again and again, closing to within a few feet before being beaten back. When the wounded men were aboard, Maj. Pless maneuvered the helicopter out to sea. Before it became safely airborne, the overloaded aircraft settled 4 times into the water. Displaying superb airmanship, he finally got the helicopter aloft. Major Pless' extraordinary heroism coupled with his outstanding flying skill prevented the annihilation of the tiny force. His courageous actions reflect great credit upon himself and uphold the highest traditions of the Marine Corps and the U.S. Naval Service

While a senior at Georgia Military Academy, Pless enlisted in the U.S. Marine Corps Reserve on September 6, 1956.  He served with the 1st Motor Transport Battalion in Atlanta.  After graduation, he attended recruit training and advanced combat training at Parris Island, South Carolina, finishing in October 1957. He then served as an artillery surveyor with the 10th Marine Regiment, 2nd Marine Division, until September 1958.

He was commissioned as a second lieutenant on September 16, 1959 while attending flight training in Pensacola, Florida.  He progressed through a number of assignments before being ordered to East Asia in 1962.  After returning to the U. S. he served in Hawaii before returning to Vietnam in 1967.  While in Vietnam he flew 780 combat missions

He is buried at the Barrancas National Cemetery in Pensacola, Florida.

The Huey helicopter which Pless flew during his Medal of Honor mission is on display at the National Museum of the Marine Corps in Quantico, Virginia 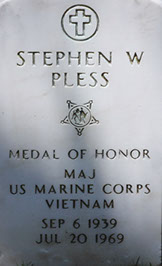